St Paul’s is located in Midtown, between Winona and Spadina; and Eglinton and Dupont. The ward is home to many residential neighbourhoods and a haven for small businesses. It is a hub with interesting urban issues; both as a ward featuring the notorious “St. Clair Disaster” (more on that later) and a ward that currently has several mid-rise developments popping up. Probably the hottest spot in St Paul’s though, is Wychwood Barns. The Barns, formerly an abandoned TTC yard, act as both a tourist destination and a community hub. An event space, a farmer’s market, public space, gardens, community services such as The Stop, and more all in one convenient location.

Councillor Mihevc has been representing the St. Paul’s community since 1991, serving as Deputy Mayor of York prior to amalgamation. He is a fierce progressive, known for championing anything social justice related, especially children’s nutrition programs. He has also long been an active voice on the TTC Commission, where he served as Vice Chair from 2006 – 2010 – toward the end of the completion of the (rather controversial) St. Clair right-of-way streetcar. He fought back against swarming negative political commentary on behalf of his residents, after opponents began referring to it as the aforementioned “The St. Clair Disaster”.

Fun facts: Mihevc parents were born in Slovenia, he was born in Toronto, and has a PHD in Theology.

What we ordered: Veggie pie Buratta with rapini (we note that the one on their site is a seasonal difference and we cannot speak to it), and Iano with tomato sauce.

Why we ordered: To be honest, our process here was more impulsive than previous posts. We were having such an engaged conversation with local councillor Joe Mihevc and his partner that our waitress had to come back a few times to see “how we were doing with the menu”, in the end we ordered a white pizza and a red pizza that jumped out at us.

If we solely rated pizzas on taste alone, Ferro would beat the rest by far. However, we fully stand by rating pizza as an experience including things like service and instagram-ability (sharing your food can be hella fun). The ingredients were fresh, the combinations were tasty, and this was easily the best dough and crust we’ve had so far – maybe ever. You get all of the toppings you want without suffering soggy dough in the middle of the pie. And yes, it absolutely aced the reheat test; baking sheet, hot oven – perfection.

We had high expectations for this joint, as we had more than one suggestion and we ran a tight twitter poll to decide. In a neighbourhood known for its food, and bordering Corso Italia, the pizza happily lived up to its hype. PS. Reheat went great, best reheat pizza so far!

When it comes to public space, Joe Mihevc is going in for seconds.

The Councillor was kind enough to join us for pizza to talk about his ward. While we dined, him and his partner shared their experiences in the political and urban development of the community. As the conversation progressed, Mihevc let it slip that he had big plans for a space just around the corner from the restaurant. 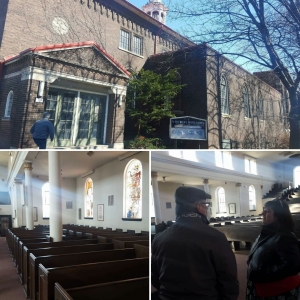 Joe showing us the space’s potential.

A local church has been struggling with falling congregation numbers. The space, in a prime location, boasts a beautiful stage, which is often used by many community groups currently unaffiliated with the church itself. Mihevc, understanding that eventually the space will likely be transformed, is already devising a plan: more dynamic public space. His proposal is bold: child care, multi-faith programs, theatre organizations, affordable housing – all right on St. Clair Avenue. In addition to public space, St Clair is notably in need of some new cycling infrastructure, which Joe also discussed with us.

His plans for this church are not pie-in-the-sky – he’s done this before, just a few short blocks away.

After the successful 2008 transformation of the Wychwood streetcar maintenance facility into a vibrant, multi-use community hub, Mihevc watched as the neighborhood come alive. People gather from all over the city to participate in activities year-round. Artscape, a non-profit that runs the space, has proven to be a worthy host; arts programs and a community gallery make The Wychwood Barns unique. 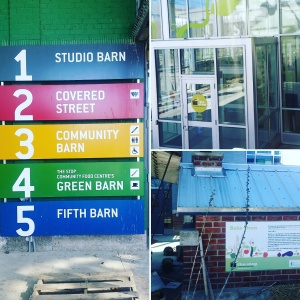 What makes it so special is how much there is going on in one place. A daycare shares the office space with environmental organizations and Not Far From The Tree. The outdoor gardens and community pizza oven (!) sit outside The Stop’s HQ. Around the corner, dog owners enjoy a fenced-in dog park, where canines and their respective humans get to know one another as they take in an unseasonably warm Saturday in March.

Seeing the space now, it would be hard to imagine that anyone could possibly deny that this was a dream scenario, but in 2002, a small and group of locals attempted to halt the project. “Neighbours for 100% Park” argued that the historic barns should be torn down, leaving them the green space they desired. Clearly not just about “green space”, the group was concerned about the increase in traffic (heaven forbid!). So concerned, they attempted to raise $50,000 to fight the project at the Provincial level. Despite this, Councillor Mihevc helped to move the project forward, knowing even then, that dynamic public space was needed for his community.

On our way to visit The Barns, we spotted a cyclist – Dave Meslin – long-time advocate of public space, bikes, and a bunch of other progressive initiatives. After a brief recap of our conversation with Mihevc, he exclaimed “This used to be a wasteland! Matthew [Blackett] and I used to do guerrilla gardening here!”

There’s something to be said about the how welcoming it is to walk into a building like Wychwood Barns. Just walk in. Public space is asking only that you enjoy it. All are welcome and there is no need to buy anything. It’s an extension of the sidewalks. 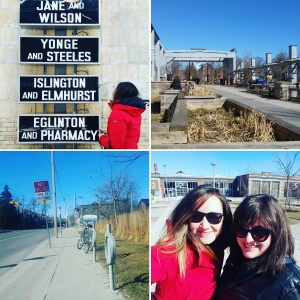 Note the bike infrastructure right outside the barns?

As a self-identified data nerd, it pains Claire to spout this hypothesis without sufficient research, but she couldn’t help but notice the cycling infrastructure lining the front of Wychwood Barns. Could there be a connection between the development of more community public spaces and increases in cycling infrastructure? If so, Mihevc is certainly on the right track.

During Claire’s last round of apartment hunting, she was advised not to look north of Dupont, because that would be the end of her cycling love affair. The sharp hill does leave many disheartened, but Mihevc has a plan: increase Bike Share access to the area so more commuters opt to cycle south, and take transit home at the end of the day. This is not to say that the hills aren’t totally bikeable, but less experienced cyclists/tired folks are often deterred, making Mihevc’s plan that much more brilliant.

Ward 21 has a Councillor who gets them. He was right about St. Clair, right about Wychwood, and we can say with confidence that this new space has the potential to be another winner. Just like the pizza at Ferro, we can’t get enough of the multi-use public space in St. Paul’s.